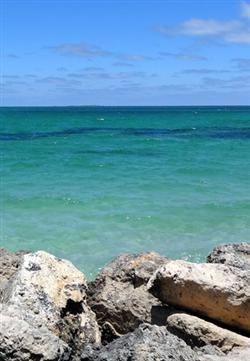 Wardan means ‘the sea’, so Wardan Boodjar means ‘sea country’ or the coast anywhere in the southwest.

Wardan, or sea, is of great spiritual significance to the coastal Nyungar.

The Aborigines along the whole line of Western coast believe that when the body dies, the spirit goes away westward through the sea to some country far away, and that there the spirit lives in much the same manner as it has lived when in the flesh … In the Swan district, Joobaitch, the last Perth man, stated that when his people died, their kaanya or spirit went away over the sea to another country, called Koorannup or Woordanung.1

Family groups used their coastal resources for subsistence, culture and trade. Cultural stories describe features of sea country. Some names and sacred sites reflect these. The family group’s identity is closely related to the coast.2

The words on the plaque shown below were written by Mr Leonard Collard, Nyungar Elder and Traditional Owner, and tell the story of the sea breeze and the easterly wind chasing each other across the coast. The plaque celebrates Nyungar cultural life on the coast and is located at Wardan Lane at Manjaree (Bathers Beach) in Fremantle. 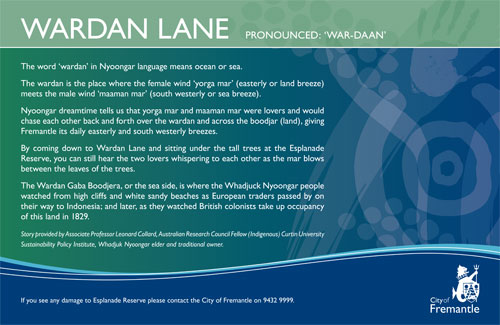 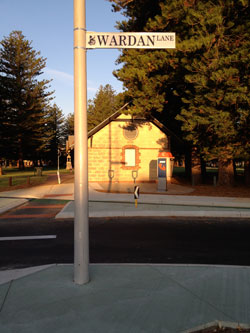 Karen Jacobs, traditional owner, sits at Manjaree (Bathers Beach) and discusses with Len Collard how traditional family life would have been

KJ: I just think that life would have been absolutely wonderful. I mean we’re talking about much smaller groups of people camping together and then sharing what they had, fishing when need be, swimming. I mean you can see the water. The colour of the water hasn’t changed much to how it would have been 200 years ago or over 200 years ago. So you’ve got Aboriginal people that enjoyed the sea life and everything that it had to offer and we’ve got so much water available to us in this area. So if it wasn’t saltwater it was fresh water and hunting and gathering and just kids playing… I can imagine kids playing around with either gumnuts and making little animals and sitting down in the dirt and then throwing skin balls at each other.

LC: Looking at the footmarks of a bird and identifying what they are, pelican or a seagull.

KJ: Look, I even do it with my kids today even if I take them for a walk along the track. The first thing I’m looking out for is for what animals have just crossed in front especially snakes. Watching out the how big is that track and I teach my kids to actually tell how big an animal is by the imprint and the width of the track that they’ve left and that’s daily and I imagine those sorts of things going on daily. Kids even climbing up the trees to get the sugar bake honey from the wild bees which we would have had plenty of. I mean you’re going to find wild bees, these native bees these days and the medicine honey and then old people sitting down and the women talking around the fires telling stories about each other or having a laugh about their men and you can just see it and to me I think life would have been absolutely wonderful … I still see glimpses of that even today and I go not so much around Perth but when I go outside of Perth and into remote regional areas I see glimpses of that. Still I don’t see the relaxed people that we should be and anyone who is in the south-west were always relaxed, were always hospitable...3