LC: Now, just first of all, Kaia - my heart’s beating a lot to see you. Trevor, just tell us what your name is, when you were born and where you were born.

LC: You were born?

TW: I was born in Pinjarra on the massacre site, so that’s where I was born—

LC: What day was it? 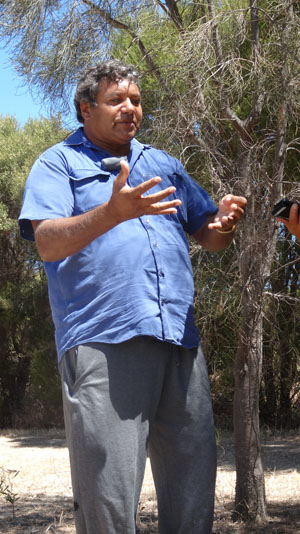 LC: It’s a day to remember.

TW: Well, yes, that’s 17 September 1957, but I always acknowledge that where I was born in is October 1834, when they actually were the European colonisers were asserting their authority on Aboriginal people by the massacre of Pinjarra, and that’s where I was born, right there where they were shooting is where I was born.

LC: So Trevor, talking about the family, tell us who your mum and dad is?

TW: Well, Dad is— my step-father is Robert Walley, the Aboriginal name for the family was the Woylie, and my mum is Theresa Winmar, and Wernmaar is the “spirit of the hands”, the “wern” is spirit, “maar” is the hand. So Winmar, spirit of the hands. And then it goes on and on all through Nyungar country. So we’re connected as from Moora, Albany, Jerramungup, Kellerberrin, the whole lot, because we travelled. And you can moort, you can find relations, all through your country. But that’s my country is the south-west Nyungar boodjar.

LC: And what about like Mum and Dad’s family, who were the old people, what was your great-grandparents’ name?

TW: Well, it goes back— it depends what line you’re going on, but—

LC: What about Mum’s line first.

TW: Well, Mum’s line always was in a mission, New Norcia Mission, and so it goes all the way back to Tolbug. Now, Tolbug is recorded as a Swan River native, and so she’s recorded as a Swan River native under the records that we obtained. And she had children, and one of them was Henry Indij, and then the children were put at New Norcia Mission and the lines goes on from there. But Tolbug had other children named Gilly, which was called Matilda, and so they were taken— Henry Indij would come down to Perth with Salvado so that the records—

LC: What, from New Norcia.

TW: New Norcia Mission. There’s records on his diaries, Salvado kept diaries in Spanish, Latin, but once we interpreted the Spanish/Latin, you could find that a lot of Henry’s sisters were taken from Perth when he travelled to Perth. So we can only trace our line back to Perth.

LC: Is that Latin?

LC: What do you know about Latin?

TW: Don’t know anything but I got people to interpret it, and they’ve got people at New Norcia Mission interpreting the Latin. So it’s pretty interesting, Latin, but that’s what they spoke. Very difficult; Aboriginal people didn’t keep records, they didn’t have written language and it’s very difficult to—

LC: Because the surname Walley or Woylie, in the mission records at New Norcia, your old people I think are mentioned as being Christianised and baptised in those records.

LC: And I think what was interesting for me, because despite my memory, that my old people are in the same books, so I guess both on the Swan River side of things as well as the missions up in your country there, the relationship and connection to myself and yourself and our families go back pretty well to the same camp fires, really.

TW: We all go back to the same campfires, Leonard, you’re absolutely correct, and that’s what’s very strong about our culture, that people embrace people, embrace Nyungars, because we all have a similar story, we all have a similar culture and we’re always— a hard struggle, but the strength of the family kept the Nyungar people together and no matter where you go with the Nyungar family, you’ll always find a bed and a camp fire, so wherever you go in Nyungar country, you’ll always find a bed and a camp. So history brings us back together. And yes I must be honest, I think if it wasn’t for the different churches, a lot of us wouldn’t be here, because they provided us a bed and shelter and food when the rest of society was just abusing and using us and killing us. And so churches enabled the children to survive to the present where we can have a look at it and seriously think about how we were treated by society as a whole….

TW: … I grew up on the banks of the Murray River, so I grew up at the Bend, we call it the bend at Ravenswood. So Granny Kay—