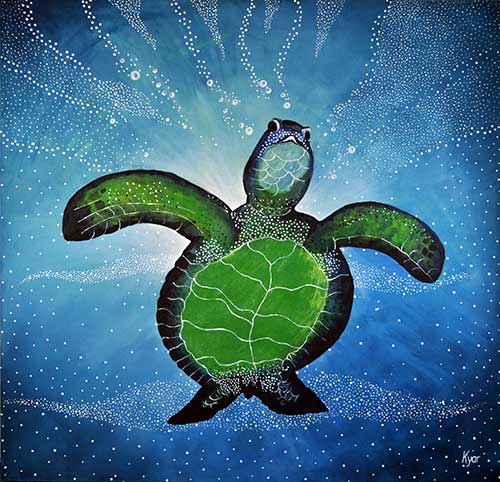 Nyungar have rights and responsibilities for other people coming onto our country. Visitors to Nyungar country should follow certain protocols and courtesies such as acknowledging the Traditional Owners in formal situations.

There have always been travellers and visitors to Nyungar Boodjar and many have ended up staying here.

Some ancestral spirits like Yondock the ancestral crocodile have travelled down from the North. Other visitors are the sea animals that travel along the coast, such as the whales and even the turtles. Some hitch a ride with the warm Leeuwin current that flows from the North.

And this yondock comes down and he’s aiming for this fish here, this Point Peron here is called moorli borlup, the yellow-finned whiting fish. He’s coming down and by pushing his way in, Wadjemup was created just because of his actions. Then he started to push his way in, I’m not quite sure which came first, but he’s pushed his way in. Ngooloormayup came, which is Carnac Island, our little ngool (brother) …Carnac Island is a Ngooloormayup, little ngool to us. But Wadjemup came first. … So the yondock, the crocodile went into a cave and thought about it, and he came out as an emu, so he was able to go back to Broom as an emu. …I think Price Point is the emu dreaming that went back, and you can see the emu in the footprints. So my culture is connecting us to Price Point with the emu dreaming, that’s how the emu got back, and that’s where the emu came from, from Swan River. So the emu man, up in Price Point, comes from Perth, Swan River, that connects us.

The painting above is by Mr Noel Morrison. His Nyungar name is Kyar.

The painting is about a man's children who went out fishing and their father thought they would be alright. But then it started to get late and he started to worry. So he jumped in a canoe and went to look for them but he never found them. He looked everywhere till it got really dark. He dived into the water and looked for them under the water. As he swam under the water he stopped breathing from the worry, and finally turned into a turtle and even today he is still looking for them.

Mr Morrison’s second wife is Mrs Glenda Morrison nee Cooyou, a Yamatji woman from Carnarvon. Her grandfather’s name was Gwooninwardu which is also the Yamatji name for Carnarvon. In their country they catch and eat turtles which they call Majgin. Her father would swim out to get the turtles. The family always looked forward to that big feast. The first time Glenda came to Noel’s house, she saw this painting and said to Noel, 'This is mine'! She occasionally sees turtles in the Fremantle and Cockburn Sound area when she is fishing.

‘One day I decided to go fishing. I was catching strange fish and I didn't like the look of them. I could smell the breeze which I love, but I couldn't catch any fish that I wanted so I said to myself 'I'm going home now'. As soon as I said that, a turtle showed himself.  He was about half a metre long. I said to myself, 'This might be a message back from the old people - I think it is my old father showing himself. He has followed me down here from our own country near Carnarvon'. When I see the turtle he makes me think of my father's family.

Mrs Morrison has taken local ladies from the Ottey Neighbourhood Centre in the City of Cockburn up to Carnarvon to show them her country. So visitors go both ways between the northwest and Nyungar country.