LC: Anyway, Karen, tell us what your name is, where you were born and when?

KJ: Okay, Karen Jacobs, the oldest of five girls from Cedric Jacobs who was a senior Elder here for Whadjuk people. I was born in Perth in 1965 so I’m the ripe age of 47 turning 48 in a few short months and continuously get reminded by my mother that I’m nearly 50! Actually I’ve been reminded by her for the last five years that I’m nearly 50!

LC: What was the date of your birthday sorry?

LC: You mentioned your dad. Tell us a bit about your mum and your dad.

KJ: Okay, well my father, Cedric, was taken away from his parents when he was eight years of age up in the Swan Valley. Him and his two younger brothers actually an older brother was taken as well but he managed to escape that morning from the officers that came in to forcibly remove the children from their parents early in the morning. My father and his two younger brothers from that point never seen their family again, their parents or their older siblings and so they were the three youngest of six children.

LC: So where were your parents staying when this happened and what made the intervention occur? 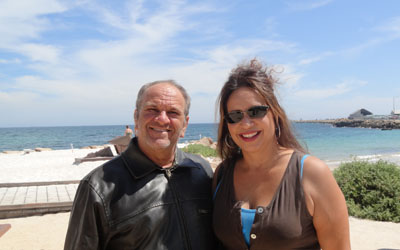 KJ: I think intervention was part of government policy in the day. There wasn’t really any real rhyme or reason. They were a very loving, caring family. My grandfather was working a lot on the vineyards and on the farms repairing fencing and shearing, doing the usual to try and get money for his family in those years. So there wasn’t any particular reason. The children were all in good care but the government officers and the Department of Family and Children’s Services or whatever the Department was called in that day, seemed fit to remove all the children. Well whether they were full blood or not of full blood really didn’t come into question during that year. Then the late ‘40s, early ‘50s and then they were removed and taken to the courthouse on the corner of Woollcott Street and Lord Street in Perth which still stands today and is still operated by the Department of Family and Children’s Services as a holding facility for children. So that was where the original courthouse was and three little ones were taken there, stood before a magistrate and then ordered up to Mogumba Mission where they were taken the next morning.

LC: So what’s the family members in your dad’s family? What’s their names?

LC: So you’ve lived pretty well in and around Perth all your life?

KJ: Yes I have. I’ve spend the first few years back up at Mogumba Mission when I was a little one up until about five and then we went across to Queensland for a couple of years while dad went to theological college and then came back again. So basically, between the northern suburbs of Perth and down to Mandurah all my life.
Photo Angela Rooney